Big cities have big name recognition with travelers, especially when planning a once-in-a-lifetime type trip to a destination like Europe. But getting out of town, and leaving those well-known cities behind, can come with big benefits.

Paris, London, Rome and Amsterdam. They’re all big cities, and even if you’ve never been, you tend to know a decent amount about them. Leave city limits – and all bets are off. But in Amsterdam, that’s a good thing.

It’s kind of a well-kept secret, but Amsterdam has beaches nearby. Zandvoort aan Zee  is just one of them. On summer days, it’s a half hour straight train ride from Central Station. Locals, in true Dutch fashion, come by bike in great numbers. The coast can be a bit blustery, just like our Bay Area beaches, but that doesn’t stop the crowds from coming. The brave swim, and kite surfing is all the rage. Beach clubs line the sand. There’s even playgrounds for kids. Folks take advantage of every minute of summer days in Zandvoort aan Zee.

Amsterdam is known for its charming canals, but it’s not the only Dutch city with canal bragging rights. Welcome to Giethoorn where the best to way to explore the neighborhood is by renting an electric boat. Along with homes there are some guesthouses, restaurants, and shops, but there’s no traffic, because there’s no roads in the village. Just walking paths and the canals, so residents depend on boats and wheel barrows to bring in anything they need. Vehicles have to be left in parking lots outside the center of the city.

Bridges allow pedestrians to move from one side of the canal to another, and if you think they look un-usually high, you’re right. Back when farming was the way most families made their living, cows often had to be floated one place to another, so the bridges had to be high enough for a standing, floating cow to pass under.

If you’re more of a city slicker, head to Rotterdam. In less than an hour’s train ride from Amsterdam skyscrapers of every shape and color are waiting. Bombed during WWII, little of the city survived, resulting in the metropolis visitors see today. A big port city, that maritime feel prevails. It’s a great city to wander and particularly, to eat.

Markthal gets your attention from outside, but inside is where you want to be, with dozens of food stalls serving everything from cheese and chocolate, to sausages and doughnuts. In between bites, be sure to look up and around. Walls of glass, specially designed to move with the wind, help light up the huge mural that covers the ceiling.

But if you have time to see just one thing, head straight for the windmills of Kinderdijk. 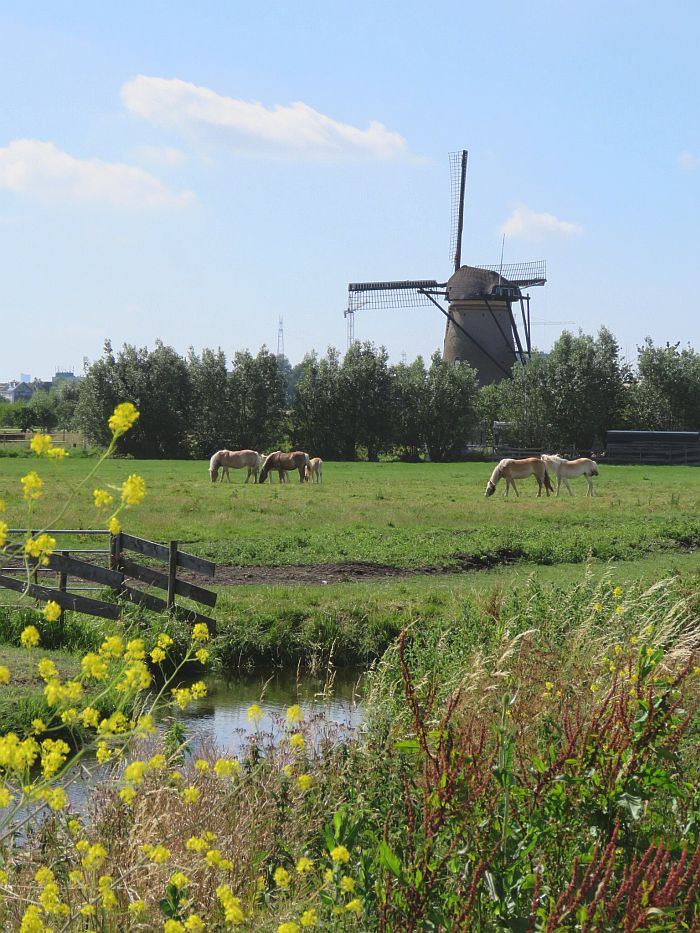 Most folks are surprised to learn that these windmills are actually homes, 15 of the 19 windmills are inhabited by millers, or persons tasked with operating a windmill to pump water and prevent the below sea level scenery from becoming submerged.

Two windmills are open to the public. The Blokweer Windmill, restored in 1975 and again in 1997 after a fire, is believed to date back to around 1500. Using a series of staircases, visitors can climb to the top of the Nederwaard Windmill, peek in bedrooms, and take in views from the inside out. Visitors can walk along a path that runs through the neighborhood of windmills, but the electrical sight-seeing boat tours come with not to be missed water views.